With the launch of our new web site, we’ve added a blog. Here we’ll keep you updated on the latest news and trends for safety in the material handling industry. That may cover many topics, from the latest forecasts for manufacturing and material handling, updates in regulations and standards from OSHA and ANSI, as well as some of our safety gate installations and custom work.

On the blog you’ll also find updates from some of the organizations we belong to, like MHEDA and MHI, as well as MHI’s ProGMA Committee.

We’re looking forward to sharing our news and views with you, and if there is a topic you would like us to touch on, just let us know. 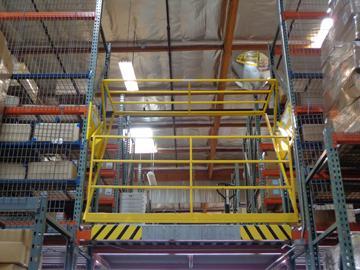 A number of years ago we were contacted by a systems integrator that needed a safety solution for the pick modules they were designing for a client. As an innovator in material handling safety solutions for over 30 years, there are few applications that we haven’t seen, and this project was no exception.

The system was being designed for a national retail company’s new distribution center which included several pick modules that extended three levels above the floor. The operations process consisted of lifting full-case pallets up into the pick module and staging them into the pallet rack bays. Pickers on the platform would fulfill orders by removing items from the pallet and placing them into bins on to the takeaway conveyor.

One of the systems integrator’s main concerns was securing the ledges of the elevated platforms; the system was three stories tall, and the pickers were going to be working off the pallets staged at the ledges of the module. Their client wanted a system that would ensure that proper safety guarding would be in place at all times, and that it would not depend on the actions of the employees to keep the guarding in place.

Our team has a lot of experience securing this type of application. We designed the original dual-gate system, the Roly safety gate, in the early 1980s. The Roly model consists of a gate at the ledge that is interconnected to a rear-side gate behind the pallet, configured so when one gate opens, the opposite gate closes, ensuring a gate is always in place to secure the ledge. A few years later, we modified the design to attach to the rack uprights to secure pallet drop areas in pick modules.

The system integrator was familiar with our Rack Supported version of the Roly safety gate from working together on several previous projects, and was interested in the same model for its client’s new distribution center. However, the lay out of this system provided some challenges to using that model. Due to the footprint of the building and how the modules had to be configured, there was a narrow aisle on the platform between the rack uprights and the conveyor. The pickers pushed carts down this aisle instead of rolling pallets so the aisle didn’t need to be very wide, and this lay out helped the ergonomics because the picker didn’t have to move too far with the picked items because the conveyor was located a few feet behind them.

The narrow aisle, however, created issues with properly guarding the ledges for fall protection. The Rack Supported Roly model closes behind the pallet with a permanent structure, which would have been an obstruction for the pickers walking down the aisle. Occasionally this is solved by projecting off the face of the module, but again the lay out of the building precluded this solution.

A new solution was needed. We knew a dual-gate system was still the best way to secure this type of area, because it maintains a safe environment at all times and doesn’t depend on the actions of the operator to keep the area safe. We needed to find a way to install a dual-gate system without the permanent framework that would extend back into the narrow picking aisle.

The solution was a Rack Supported version of our Pivot safety gate. The Pivot model, which we designed in the 1990s for a large national record retention center, is a dual-gate system that uses a pivoting framework to maintain a safe area.

We modified the design for this application so the safety device would mount onto the existing rack uprights. By attaching the safety gate to the pallet rack, we maximized the width of the bay, utilized a rugged connection that would be secured to the upright instead of lagging down into decking, and most importantly for this project, reduced the amount of depth required. Instead of a support structure that would be mounted back into the aisle, the only fixed support was on the rack upright. The rear-side gate and the support components would extend back beyond the upright to capture the pallet then “pivot” up and out of the way when the pallet was being picked. This allowed the aisle to remain clear whenever the ledge-side gate was closed.

The system integrator and end user loved this concept, and after we received the details on their racking configuration, we designed our supports to bolt directly onto these uprights without any holes needing to be drilled. The installation was a breeze, and the end result created a permanent, safe environment that did not impede on production.

To ensure the safety device was easy to operate for the end user, we included a hydraulic gas assist mechanism that allowed the gates to be opened and closed by a fingertip, even by employees with limited strength. We also custom painted the support frames to match the pallet rack color, and the gates were powder-coated in high-visibility safety yellow.

Since this initial project, the end user has specified the Rack-Supported Pivot Gate on all of its new distribution centers and retrofitted them into their existing facilities.